JustRite is releasing some fabulous new sets after the first of the year.......here is a sneak at one of them. This is the Romantic Sentiment's set. Just in time for Valentine's Day! This set is so versatile because it can be paired with the new Square borders or 1 5/8 round borders. For today's card though, I used neither. : ) 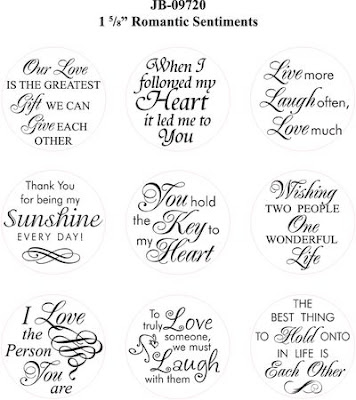 Instead I used a chipboard frame from Tattered Angels. I sprayed it with Glimmer Mist and then applied Crystal lacquer over it. I then sprinkled it with Dazzling Diamonds. I stamped the JustRite sentiment on a piece of Fancy Pants paper, placed the frame on top, and cut the excess paper off. The rest of the card is Basic Grey and Fancy Pants paper. I did a bit of stitching, added a great big Papertrey bow, some rhinestones, and a key. 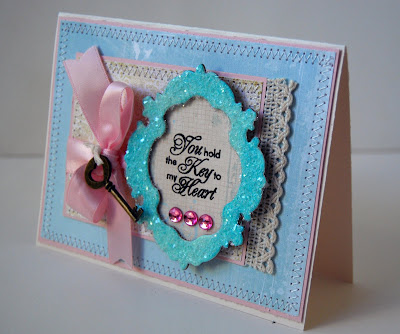 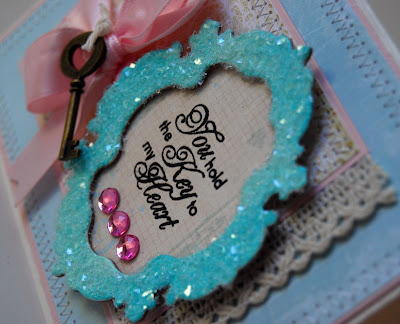 Head on over to the JustRite blog for more inspiration and a sneak at another new set. (I will be posting many sneaks here over the next week or two as well!)

Always with a Sentiment said...

WOW, this is gorgeous. I love your design and that glittered frame is just fantastic.
Happy christmas.
Love Sandra xx

Sorry I havent been able to blog and visit much in 2009 - but I hope this all changes in 2010, and I can come and visit you more often.

Wishing you a wonderful Christmas and New Year

this is gorgeous! such a sweet sentiment and I love the sparkly frame! Julia

I love these! Wow, thesews are awesome. Thanks for the sayings, Plus I have to give you creative snaps for the cards. They are all so beautiful!!

I wish you and your family a merry christmas.

Oh that card is soooooo adorable!!!

I wanted to take this time to wish you and your wonderful family a VERY MERRY CHRISTMAS!!! :-)

Oh my goodness, is this ever STUNNING!! I just love the look of that glittered up frame!!

Gorgeous card ichelle..
Merry Christmas to you and yours....
Have a fab time,loves to your Gran:)xxx

This card is sublime!
and then, all these details!
absolutely beautiful!
I am a fan of what you do!

Very pretty card! I like how you decorated the chipboard frame!

Ohhh...this is so stunning!!! I love the new releases!!! And I am wishing you the best visit ever with your sweet Grandma! Happy Holidays to you!

I really like the way you have combined all the different elements on this card - the sentiment is lovely.
The whole set of sentiments are really nice.

Generally I do not post on blogs, but I would love to mention that this post extremely forced me to try and do therefore! really nice post. thanks, here's a similar subject you'll like [url=http://www.aeonity.com/corina33/benefits-having-natural-light-alarm-time-clock]Timepieces[/url]

I love your card design. I am also going to see my mom, 92, who has alzheimer disease. Hold your mom tight even when she doesn't know you. Merry Christmas!!