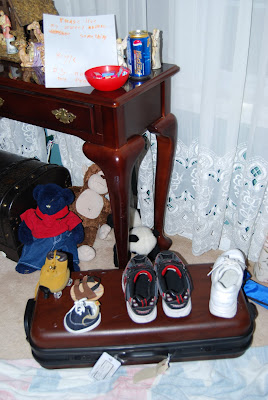 St. Nick visits our house every year. So this year Kyle, who is 10 is somewhat questioning the validity of this whole thing. I think a huge part of him really believes in the magic of Christmas. So he put his shoes out. Since he couldn't find Cortney's shoes, he put my ONE white gym shoe out for her gift. He proceeded to place his stuffed animals' shoes out! (Along with the stuffed animals....maybe he thought they would act as spies? ) 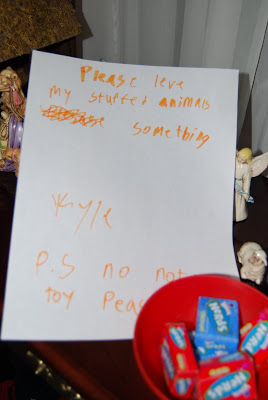 He placed a Pepsi and NERDS for St. Nick and wrote him a note asking him if he could leave a little something for his stuffed animals. (I am sure Santa had quite a bit more energy after drinking and eating Kyle's snack!) 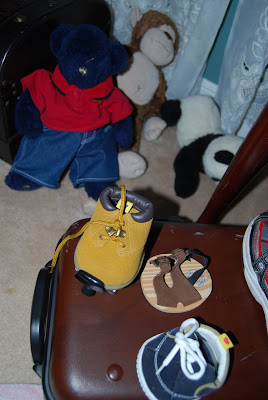 When he awakened in the morning he had a movie and Cort had a book. He asked me why St. Nick didn't leave his animals anything. I told him Santa had billions of kids to leave gifts for and there was no way he could leave stuffed animals toys too. His reply? "Boy is he cheap!" I was cracking up!!! I have seen these adorable Magnolia stamps on quite a few blogs. (Specifically Sophia Landry's over at Moonlight Inker ) I just fell in love with this sweet face. I used my Copic Air Brush system for the first time. (Thanks Carol and Simone!) I think I need to practice a little more with it. It was a bit splotchy! I used stickles on her dress. I cut the ovals with my Coluzzle and added the dew drops from Ellen Hutson's store. ( I love these soooo much! I bought 6 different colors). The patterned paper is from Mary Ann' s Etsy shop.

So, an update on Cortney's chair. We are arranging a meeting with her OT, PT, and the vendor next week. Hopefully something will get straightened out!
Posted by Michele Kovack at 8:37 PM 14 comments: 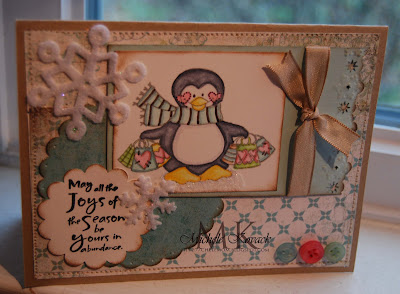 I bought this cute penguin awhile back from TAC. I colored him in with my Copics and added some glitter using my stardust pen. I punched the blue paper behind him with my Martha Stewart snowflake punch. The ribbon is SU! Kraft. I added some buttons and felt snowflakes. The patterned paper is by Basic Grey.

What an aggravating day! I had an angry mom call me after school....and Cortney's new $9,000 wheelchair is too small and alllll wrong! I think I am going to take a hot shower and try and forget what a crappy day today has been! At least we are almost to the weekend!!! THANK GOODNESS!
Posted by Michele Kovack at 6:54 PM 9 comments: 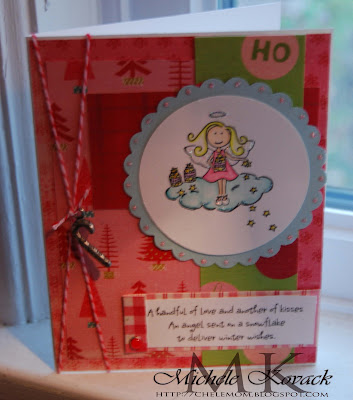 Just a quick post today! Sorry about the blurry photo..... I should be using my light box. : ) I am really loving my Elzybell's stamps! I used my Copics to color the image. The paper is by KI Memories. The charm I have had in my stash for awhile and don't remember who it is by. The twine is by Martha Stewart. I added glitter to her wings and puffy paint to the scalloped circle. Thanks for looking! 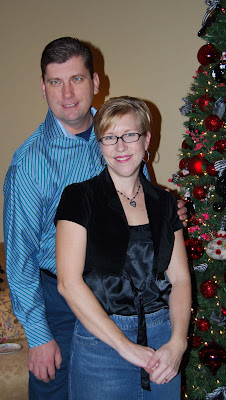 We had our first holiday party this past Sunday. Every year my Dad and Step-mom host a huge Christmas party. We eat, drink, and Santa comes to hand out presents. This is my hubby and I. Can you tell how short I am in this picture? (He is 6' 4 inches and I am 5' 4 inches!) 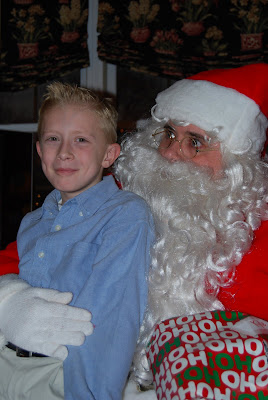 Here is my cutie pie son. Check out those adorable dimples! 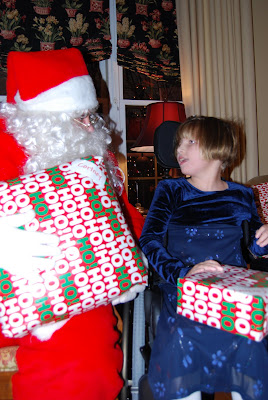 Cortney was fascinated by Santa! She loved to sing Jingle Bells and Rudolph. 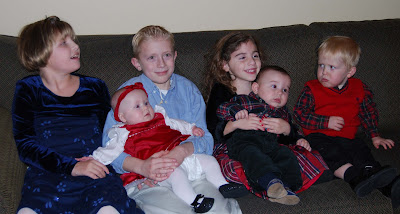 Here are all the cousins! Do you notice the little guy all the way to the right? Is his face priceless or what? If looks could kill..... He is quite a character! 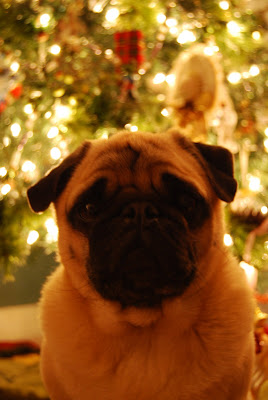 And last but not least is my Pug, Bruno. He is an "only" dog now that Molly is gone. 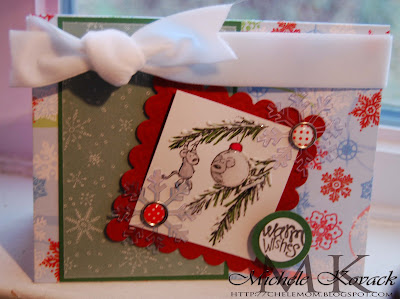 I just bought a bunch of these Elzybells cards. I love this little mouse! I colored him in with my Copics. I added liquid applique to the branches and crystal glaze to the ornament. Click on it for a close up! I cut the red paper with my scalloped spellbinders. The card base was already pattered and is made with Die Cuts With a View. I added some green SU! paper and vellum. Last but not least I attached some ghost snowflakes from Heidi Swapp with brads.
Thanks for visiting me today! Love hearing from you!