The Loves in my Life

There are people in your life who change you, they help you to be a better person. One of those people was my Nonnie. As most of you know, she passed away this fall and there is still a little hole in my heart. I've been sorting through photos and reminiscing about the things we did as kids, young adults, and even as older adults. My Nonnie was a special lady, and I am lucky to have had almost 40 years with her. I absolutely adore this picture of my sister and I with her. Although I tease my sister that she looks like she is playing favorites here! ; ) I used my Cricut to cut all of the hearts on the background paper. Some hearts were backed with patterned paper and some were left open.  The entire background was placed on dimensional foam circles for dimension.  I added the title, "Love U More...." and added a bit of lace and twine. 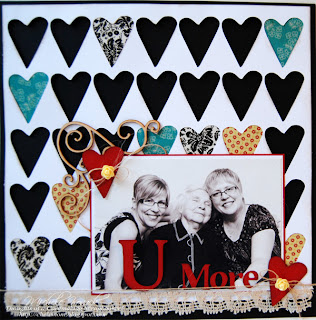 Cortney and I went to see "The Sound of Music this past weekend."  It was the very first play she had ever seen.  I was a nervous wreck!  I was so worried she would start "talking" or singing during the play and people around us wouldn't understand, or get annoyed.  But instead, my girl was silent during the entire 3 hour production.....silent as can be.   She stared intently at the stage and broke out into the biggest smile you ever wanted to see, every time they sang on stage.  By the end of the performance, I had relaxed, and seriously wanted to cry with happiness.  Cort had seen a play........with me....her mom.  A "normal" mother/daughter thing to do.  It doesn't get any better........... 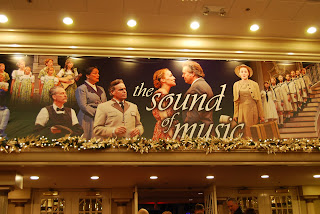 Oh.....and did I mention her best friend Patty loves her too? ; ) And Ava and Francie? 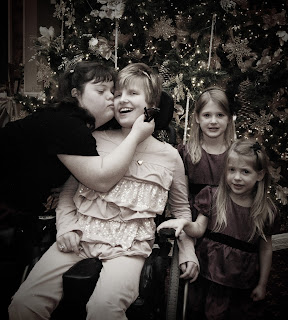 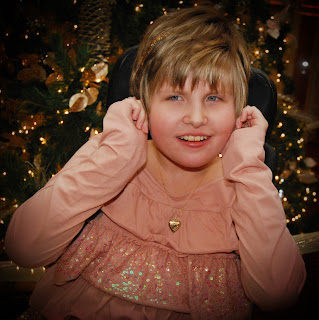 I will apologize in advance because there will probably be more Cortney pictures next week.  She has her "big" basketball game this weekend.  She just got her new cheer leading uniform which is blue this year!  She cheers with the other cheerleaders from the local high school and it is a pretty big event!  So I am excited to see her shake her pom poms and look adorable in her cheer leading uniform.  So I hope you don't mind indulging me a bit! : )
Have a great weekend!  Thank you so much for checking in today!
Posted by Michele Kovack at 5:58 AM 13 comments:

Good morning to you my crafty friends! I hope you are enjoying all of the new releases from JustRite so far! They have come out with a summer set that is sure to knock your socks off! It is an absolutely gorgeous set and makes me want winter to speed by just a bit faster! It is called Sea Shell Bay. My card today uses the sentiment and frame from the set, plus this little seashell. The panels were cut using Spellbinder's Labels Twenty-Two.   I used Helmar's crackle medium for the orange back panel.  It gives the paper such a cool distressed look!  I added this nautical bow I've had in my stash forever and tied a button and rustic twine.  I also added a hanging clear drop under the bow. 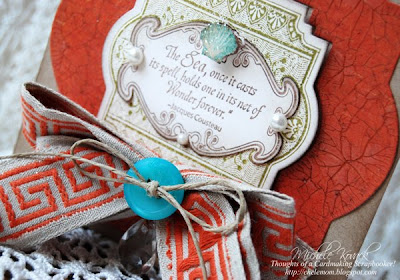 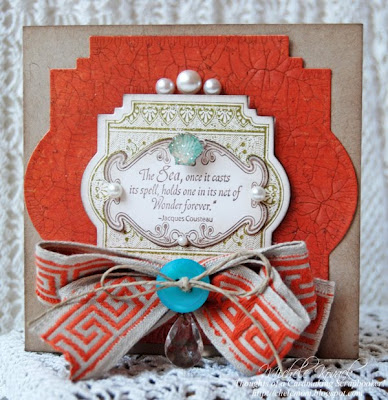 Isn't this the most beautiful summer set you've ever seen?  I have another card using this set to share in the near future! : ) 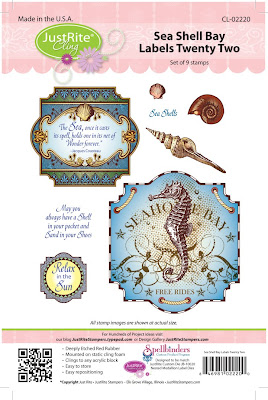 Thanks so much for stopping by today! Have a great day my friends!
Posted by Michele Kovack at 8:00 AM 9 comments:

Good morning! I have another JustRite card to share with you today!  It is a brand new set called, Starburst Medallion Labels.  It has a bit of country charm to it, but I decided to go with that bright color scheme I've been attached to lately! ; ) I stamped the background medallion in turquoise and embossed it with clear embossing powder.  I added a little rolled flower nestled in a vellum flower.  I added a bit of tulle and a few acrylic pieces from Prima. 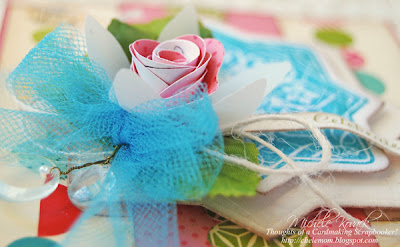 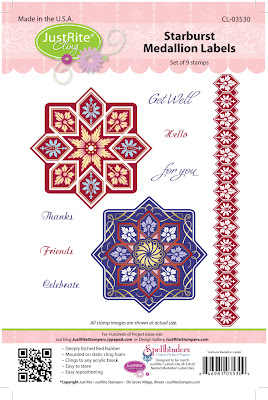 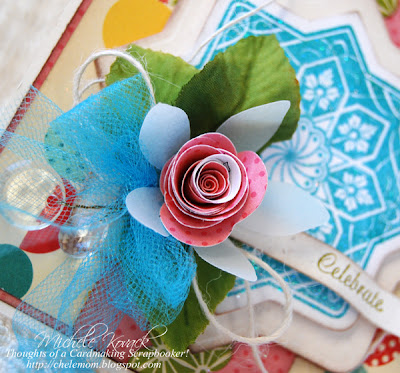 The sentiment was stamped in an avocado color and the banner was hand cut. The main image was cut out using Spellbinder's new Nested Medallions Die. I backed it with another piece of cream cardstock to break up the busy background. 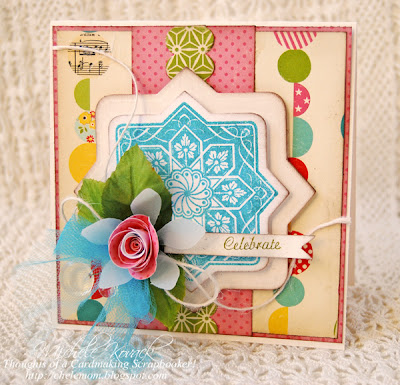 Be sure to visit the other designer's blogs for more creative inspiration! And I apologize if my post today is a bit wonky.  Blogger has changed their format and I was like a fish out of water trying to post! ; )
JustRite Inspiration
Becca Feeken
Debbie Olson
*Michele Kovack*
Kellie Fortin
Sankari Wegman
Eva Dobilas
Kazan Clark
Angela Barkhouse
Heidi Blankenship
Posted by Michele Kovack at 8:00 AM 7 comments:

Happy Monday to you! I have another JustRite release to share with you today called, Warm & Cozy! It is a fun set to color as well as gorgeous fonts! I stamped my image on vellum with black Staz On ink and then colored the back of it with my Copic markers. I flipped it over when I was done to give it a stained glass appearance. I used Spellbinder's new Nested Medallion die to create the pink frame around it. 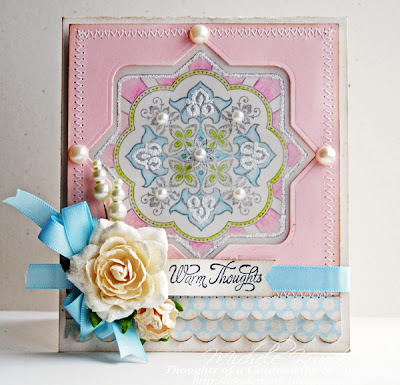 With my Sakura glue pen I added a hint of white glitter. It sort of has the look of snow I think! I added a few pearls to dress it up a bit! 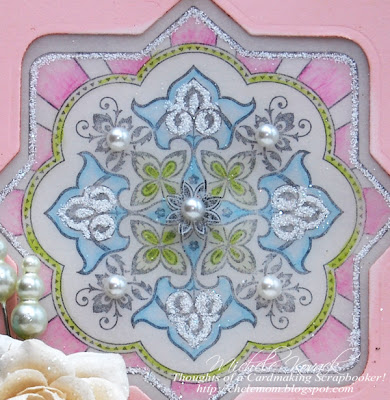 I also added a Prima flower, ribbon, and a couple of stick pins. The sentiment was stamped in black and the banner was hand cut. 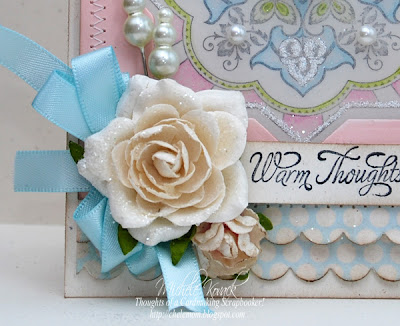 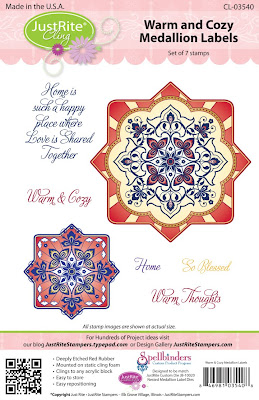 For more ideas on how to use this fabulous new stamp set, be sure to visit the other designer's blogs! : ) Don't forget to check out JustRite's sale too!
JustRite Inspiration
Becca Feeken

Angela Barkhouse
Posted by Michele Kovack at 8:00 AM 9 comments: