It's Friday, it's Valentine's Day, and it's a half day institute at school.  I am a happy camper. :)
My longest week in history has finally come to an end!

I have a Valentine's Day banner to share with you that was published in last year's February issue of Cricut Magazine.  The pennants were cut using the Pretty Pennants cartridge.  I went with a traditional color scheme of pink and red....with a few touches of book paper, cream, and blue. 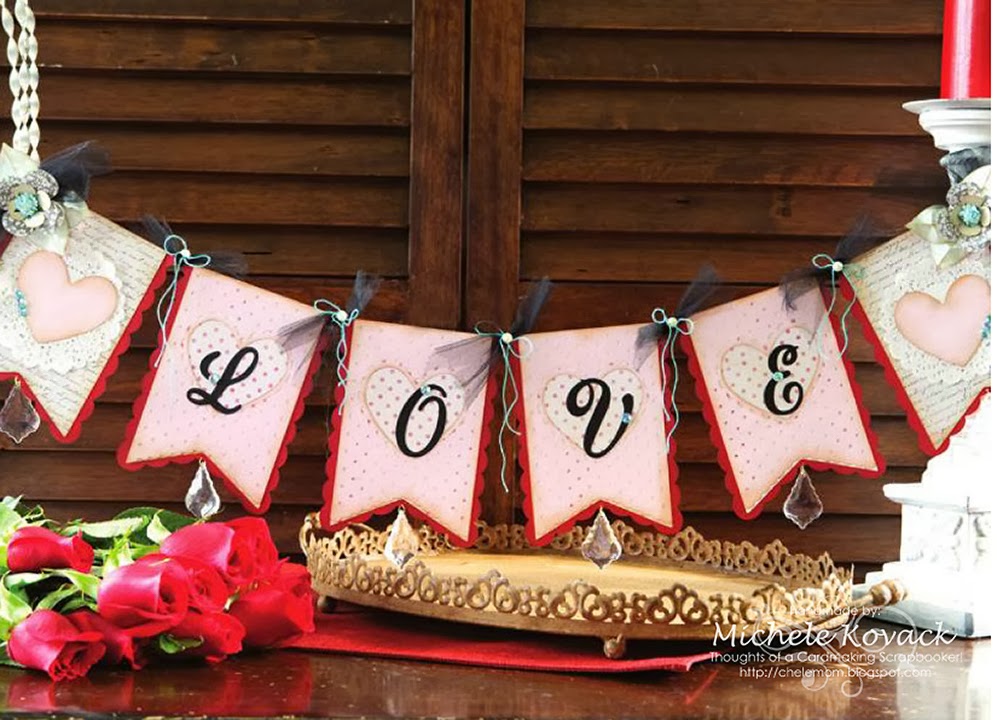 I added clear dangling gems at the bottom to dress it up a bit and give it some movement. 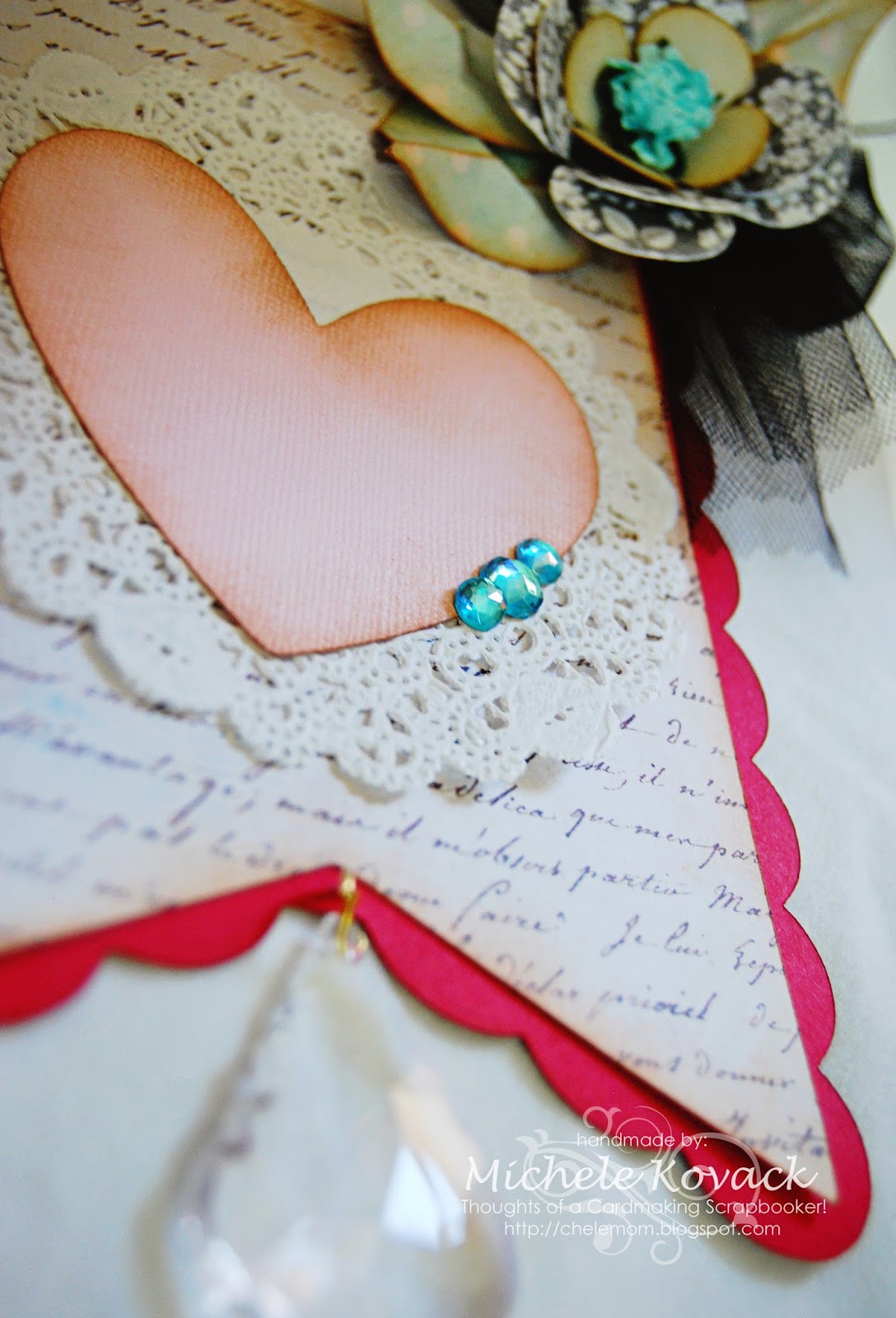 In between each pennant I a tied black tulle, blue string, and pearls.  The ends were finished with a dimensional flower. 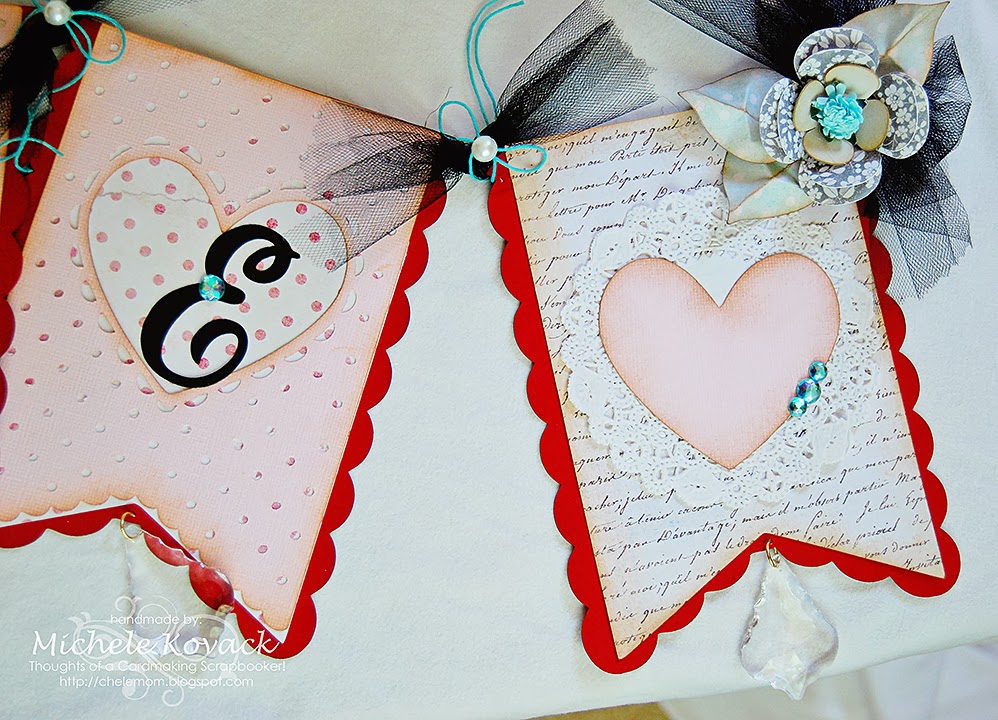 The flower was cut using the Flower Shoppe cartridge and adding a store bought flower to the center. 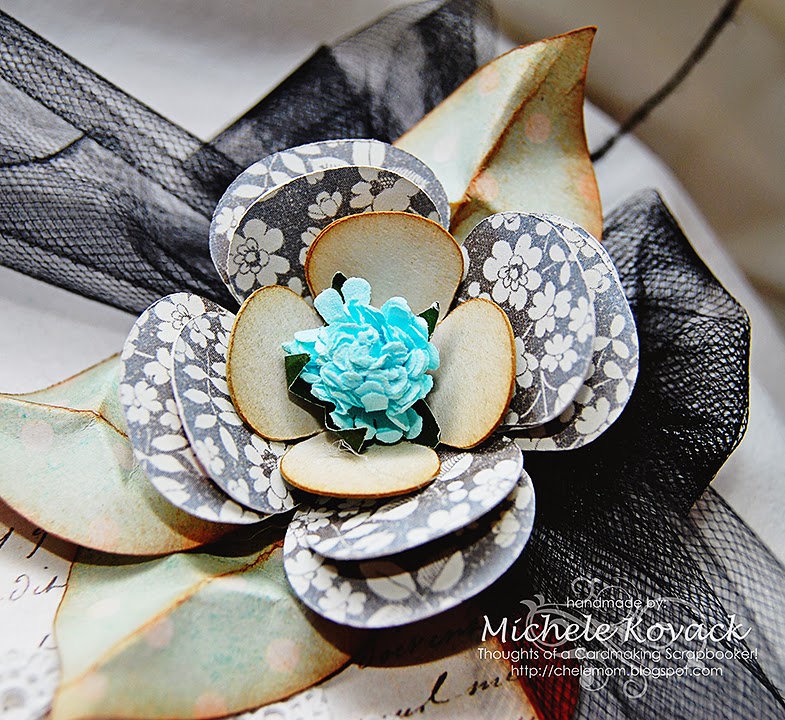 Here is my girl all decked out for Valentine's Day.  She was so excited yesterday to pass out her treats to the students.  And was even more excited to eat the treats she received! ;) 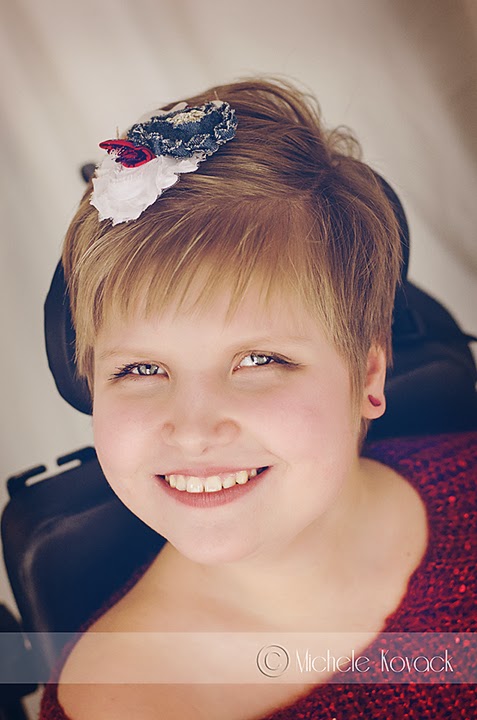 Have a wonderful weekend with your sweeties!

Check back later this weekend when I will be offering a pretty great stash of stuff to one lucky person!

Posted by Michele Kovack at 5:38 AM 9 comments:

I have another Valentine owl treat bag to share with you today.  I had another one here. I found this pretty blue heart paper in my stash and used it to direct my color scheme. I love creams, pink, blues, and kraft together.  I used my Silhouette to cut this owl treat bag. 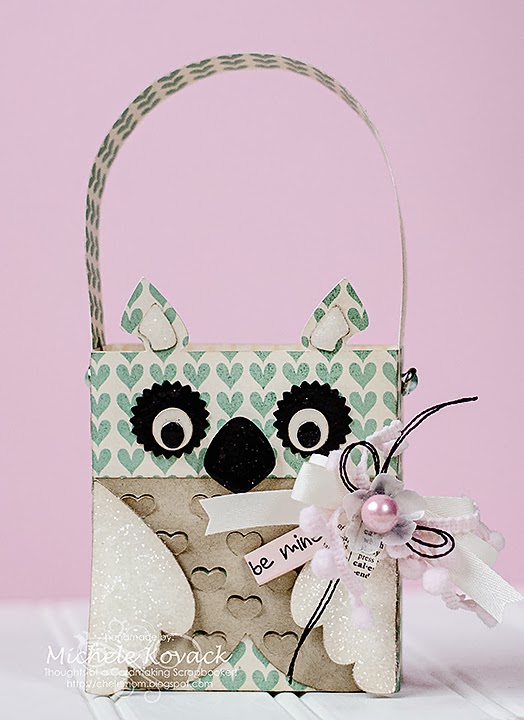 I assembled it and added my own personal touches to it.  Glossy accents for the eyes and beak. Glitter to his ears. 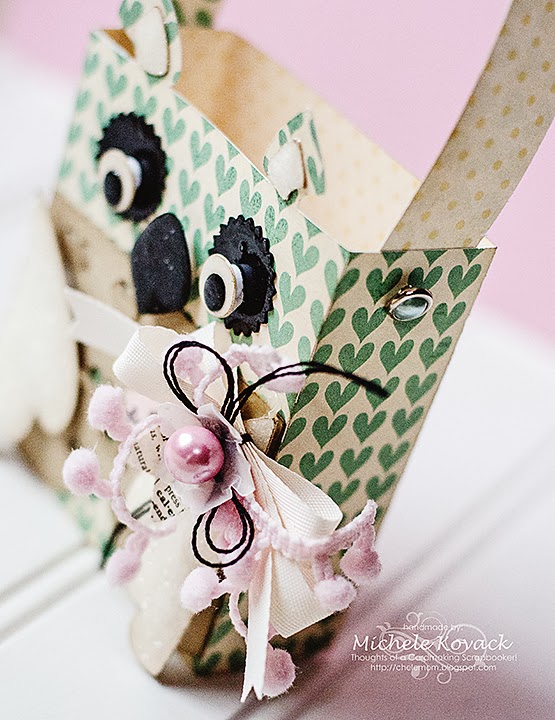 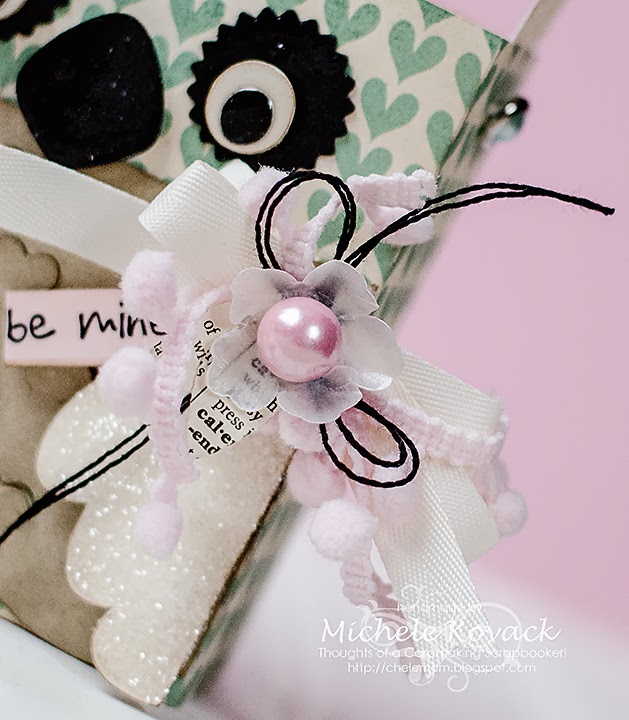 I am running out the door this morning for work, so I gotta keep it short!
Have a HAPPY Thursday my friends!

Posted by Michele Kovack at 5:55 AM 2 comments:

Some People Add Such Joy!

How is it possible that it is only Wednesday? This has to be the longest week in history!
I have been doing waaaaay too much chasing and running.

Kyle got a job at our local pizza place.  I am quite proud of him.  I don't talk about him quite the same as I do about Cort.  Mostly because he looks at my blog, he's a boy, and he's 17.  But he has had his share of struggles, and plenty of  ups and downs.  I don't want to get into the nitty gritty of it all and possibly risk embarrassing him. But let's just say that his struggles are different than Cort's, but can be just as difficult as hers in a different way. He is aware of his differences, unlike Cort, and that makes it difficult for him. For me. It breaks my heart some days to see what he has to go through.
So for him to interview well and land a job is quite an accomplishment! His grades are good, he is signed up for the ACT, and he is starting to look at colleges seriously.
He is one of those people that does add joy to my life.
He is my baby. My "Renaissance Man." 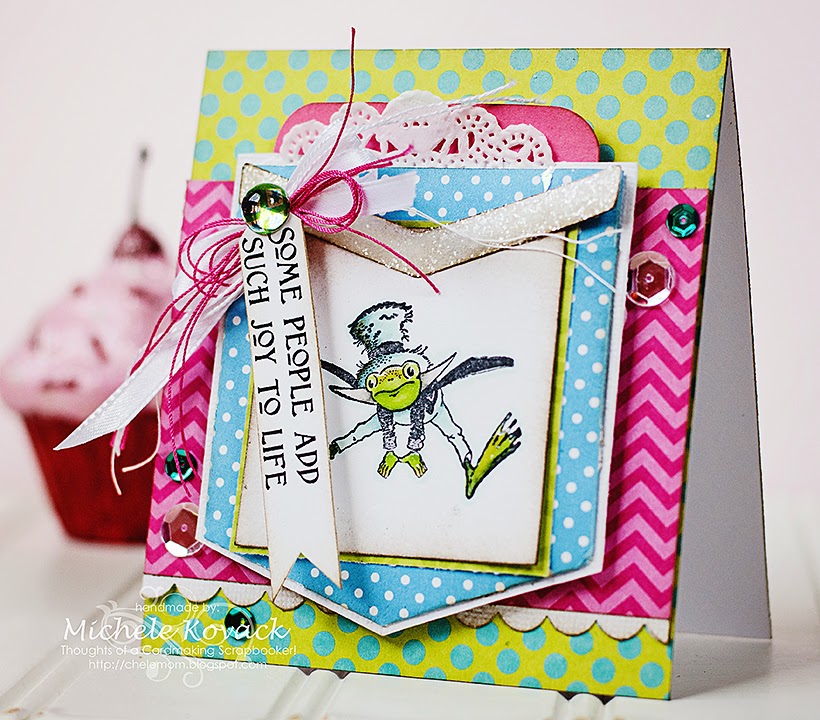 My son also collected frogs when he was younger.....so this card is perfect for him. It is a Crafty Secrets image.  It was colored with Copic Markers.  The pocket was cut using my Silhouette. (Which I still can't link to because my computer is telling me it is a malicious site?)  The sentiment is also by Crafty Secrets. 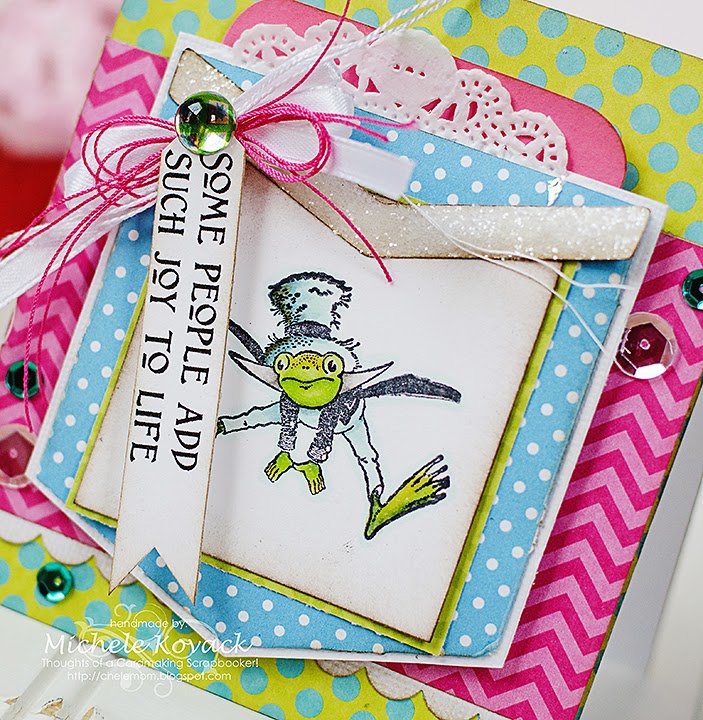 I added glitter and touches of glossy accents to the frog. 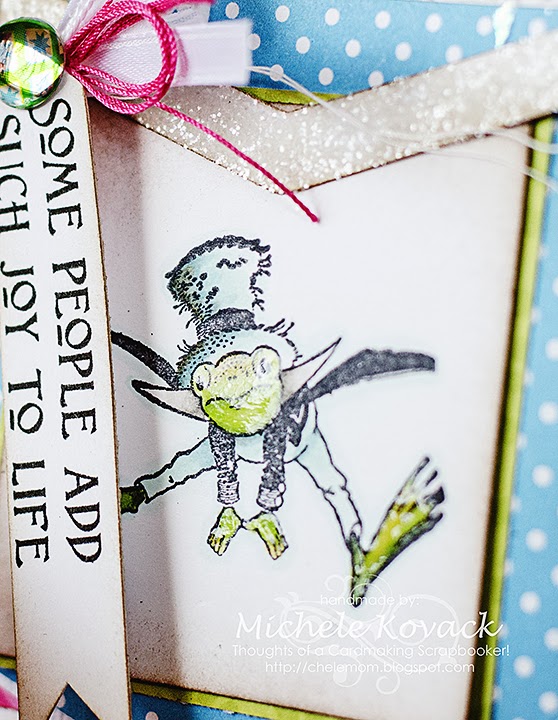 Here's to a speedy end to this week! ;)
Thank you for stopping by!!!

Posted by Michele Kovack at 5:54 AM 3 comments:

Good morning on this chilly Monday!
Today is JustRite's last day of their February release. I hope you've enjoyed all the new sets available!
Today's set is called, Time Heals Vintage Labels Seven.  It is a pretty set that coordinates with Spellbinders Labels Seven Die.
I stamped the clock face in black and cut it out using a Spellbinders circle die.
I added Crackle Glossy Accents to give it an aged appearance.  Once it was dry I added metal clock hands.
I stamped the frame in grey and a cranberry red color and cut them both out with Spellbinders Labels Seven Die. They were layered along with the clock face. 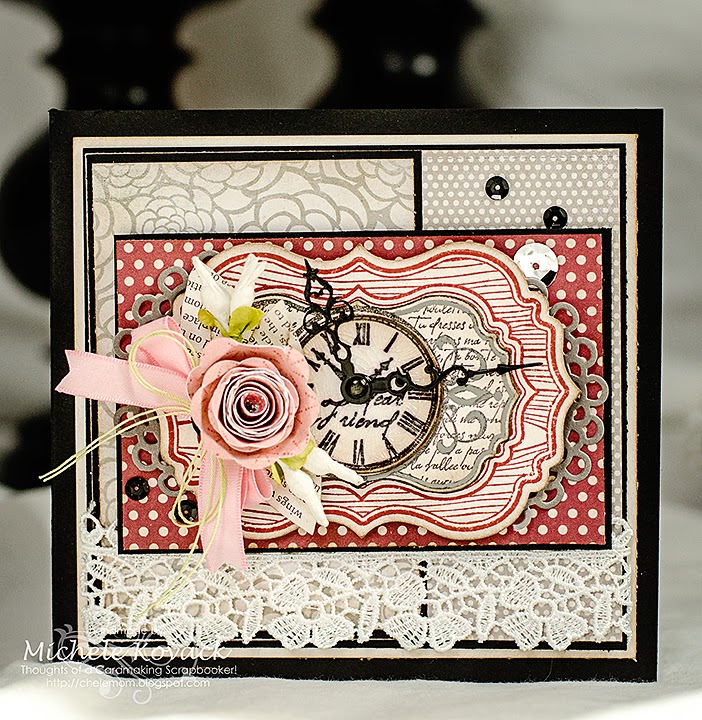 I added a flower that I had cut previously using my Cricut machine.  ( I always keep my leftover Cricut cuts!)  I added it to the front of my card, added book paper leaves, and a couple of flowers I had purchased at Hobby Lobby.  I added coordinating string, sequins, lace, and a peek of a grey doily. 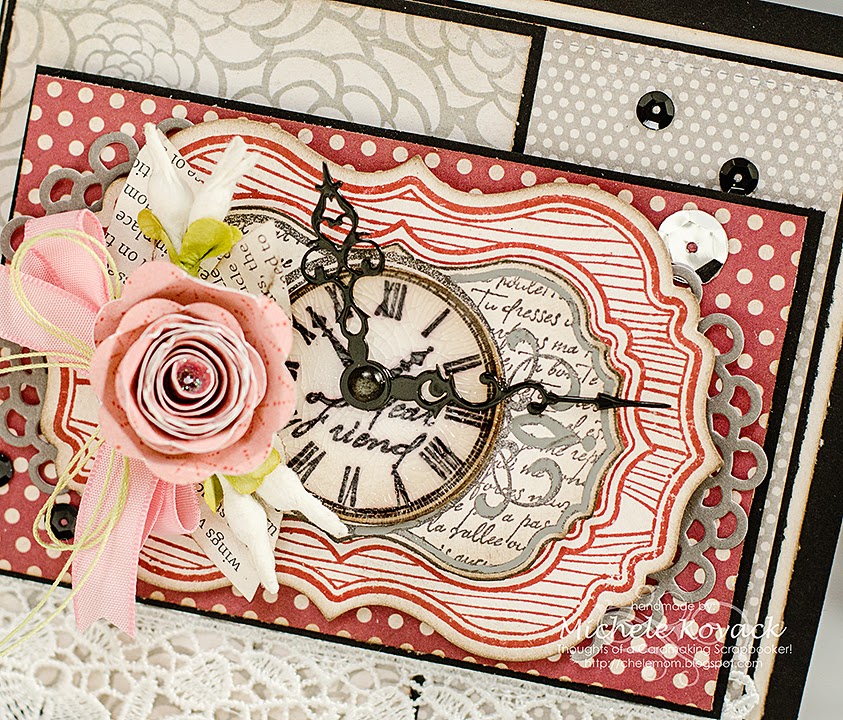 Here is the entire set....such a pretty font and sayings too! 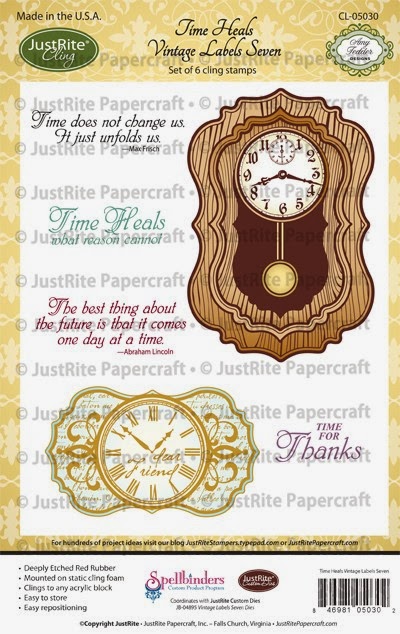 Are you ready for another cute release by JustRite?
This set is absolutely perfect for any sweet treats you give as gifts, or a card to accompany it, or how about a scrapbook page related to food?  You know you are one of those people who takes your camera or I-phone to restaurants to take pictures of your food! (Please tell me I'm not the only one who does that!)
It is called, Home Bakery Labels, and was designed by Samantha Walker.
I found this oven cupcake box on the Silhouette store (I can't link because my virus software is telling me the site is suspicious?)and thought they would make a perfect pair!
I decided to go retro with a pink and blue theme.
I assembled the box and added brads for the dials and such. 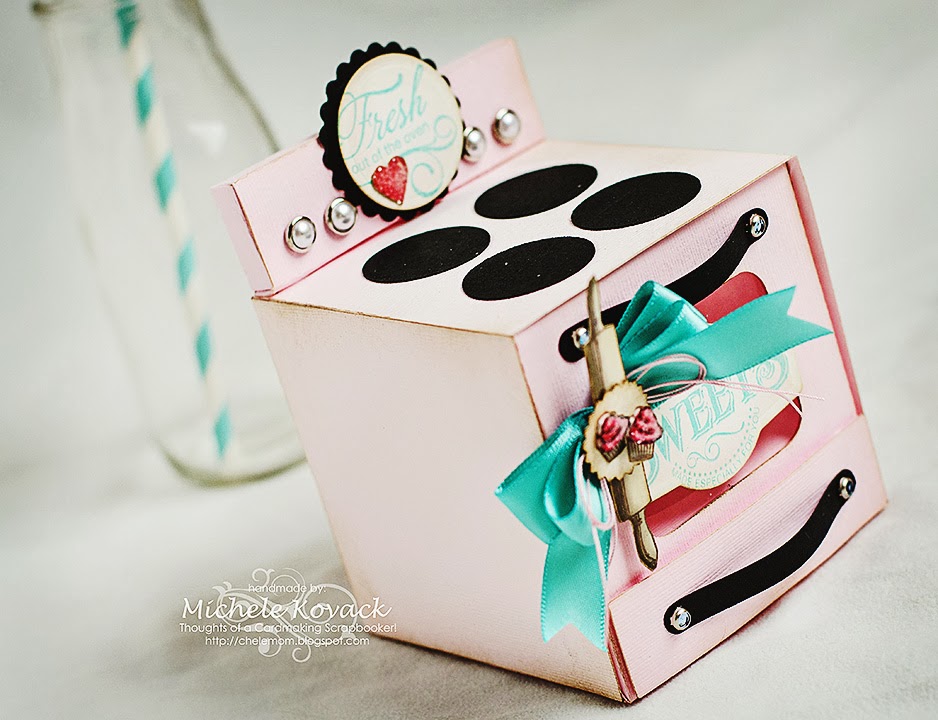 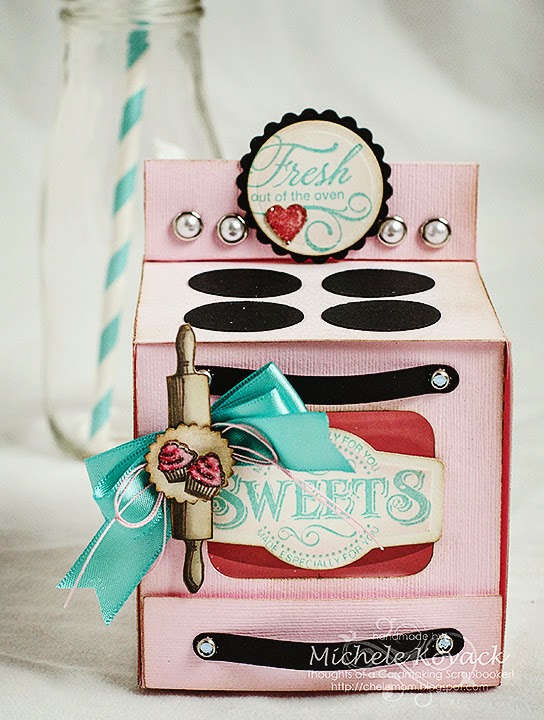 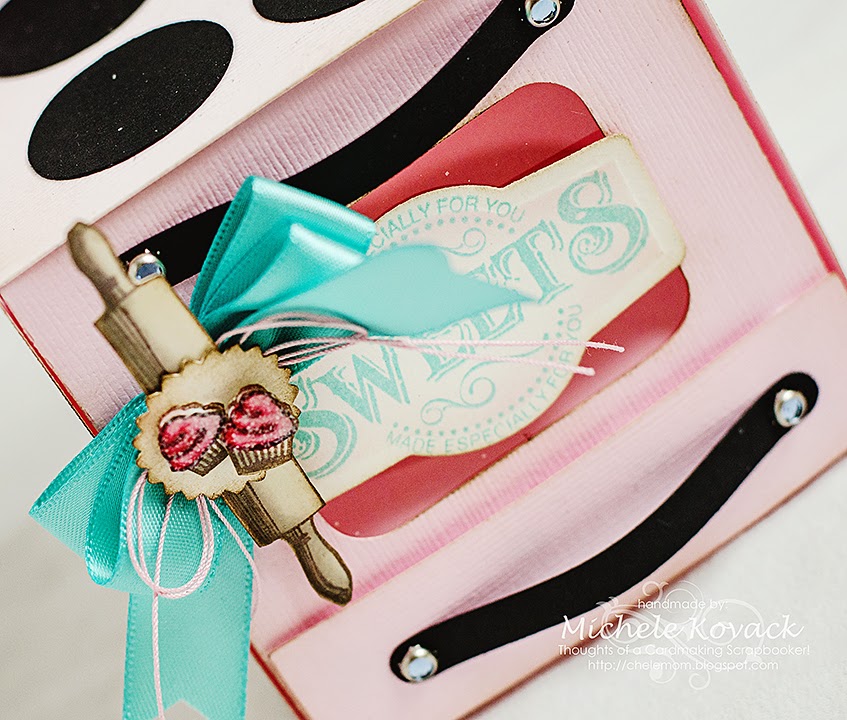 The box opens to reveal the yummy cupcake inside! I wish I could tell you that I was talented enough to bake something so pretty.....but I can not tell a lie.  It is a store bought cupcake. ;) 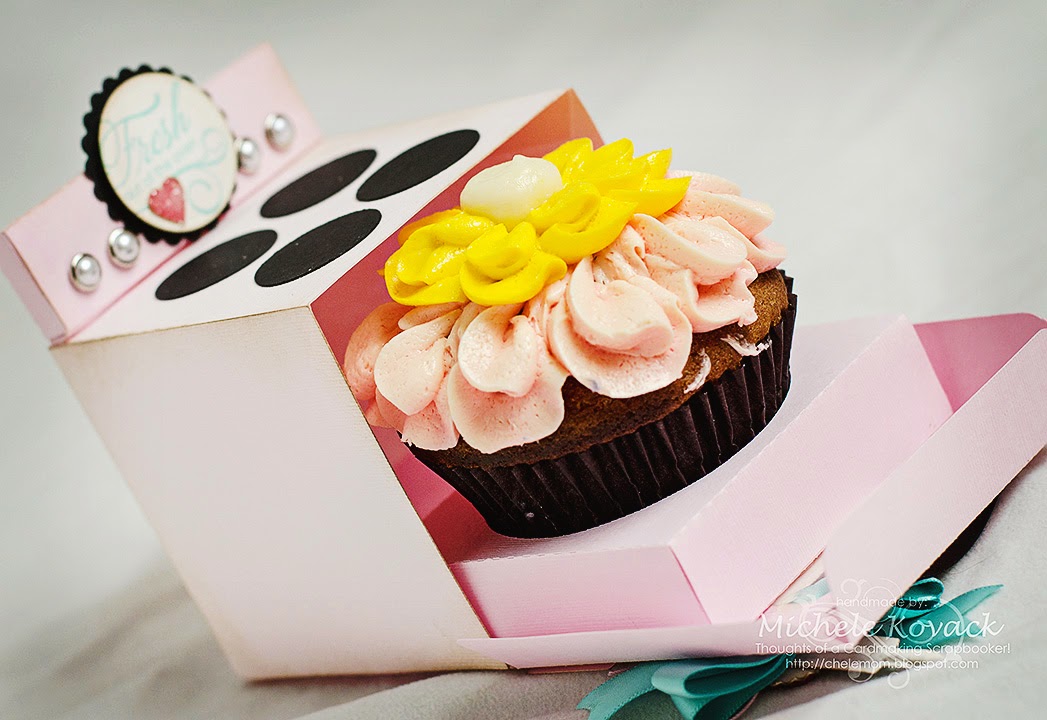 Here is the set in in its entirety.  So many fun possibilities with this set! 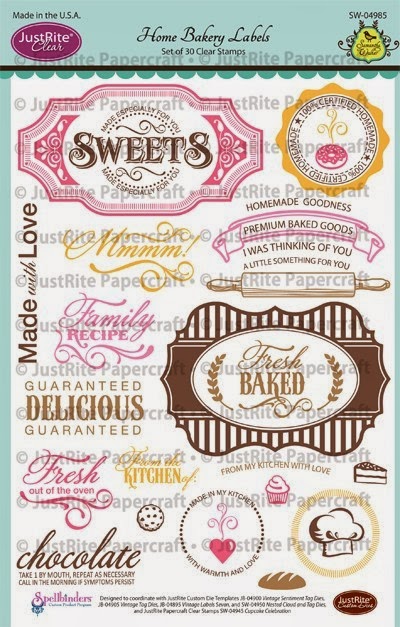 Don't forget to stop by the other designer's blogs!
They are a talented group with lots of fun projects to share!

Posted by Michele Kovack at 9:10 AM 7 comments: