Good morning! Nothing like showcasing a variety of holidays on this ole' blog huh? How about we switch to Halloween for a couple of days? ; ) JustRite has come out with a couple of fabulous Halloween sets for CHA, and the first one is this darling little set called, Trick or Treat. 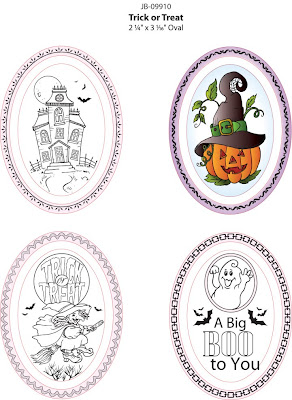 I found this gravestone box on my Happy Haunting's Cartridge and decided to make a Halloween treat box using my Cricut Machine. It was cut at 6". To make the gravestone look mottled like real stone, I used my Colorless blender fluid, Copic C3, W3, and an old wash cloth. I moistened the washcloth with the Colorless blender fluid and swiped the two colored markers across. Then I just dabbed the grey cardstock! I colored the ghost with Copics and added glitter to his body. I hand cut the oval/ghost out. The background sentiment was cut using an oval Spellbinder's die. 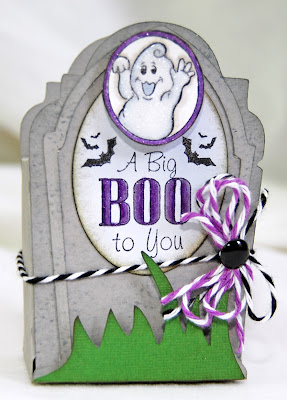 The grass was attached with a dimensional foam circle to create depth. I tied some twine around my box and a clear epoxy circle. 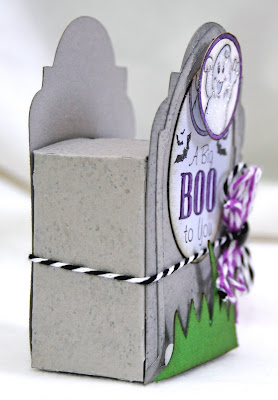 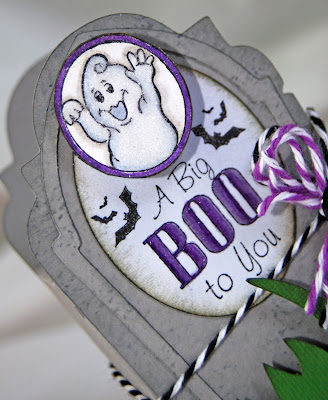 Good morning my friends! I have a couple of things to share with you today! First I wanted to let you know that JustRite is now selling their new catalog! It is selling for $4.95 and is shipping out starting July 9th. The catalog is 56 pages and contains images of the entire 2011 collection! Order yours HERE! : ) 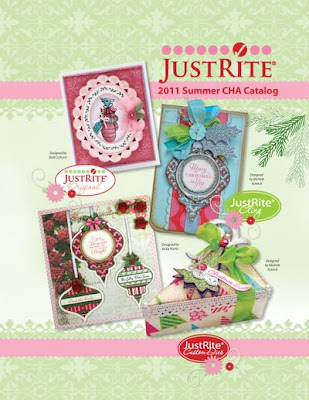 Today's release is called Elegant Charms. I love tags but decided not to use this set in a traditional way......instead I created a flower and leaves for my little birthday cake! 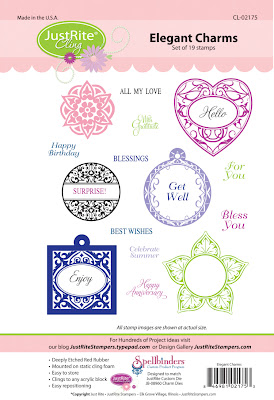 I used my Cricut Expression, Gypsy, and Elmo's Birthday Party Cartridge to create my 5" cake. I stamped my flower usingPapertrey Ink's Spring Rain ink. I used the other flower image and stamped it in Avocado Green. I cut the petals apart and used it for my leaves! I stamped the image on a tag that had been cut using my Sentimental's cartridge. The paper is from Girl's Paperie. 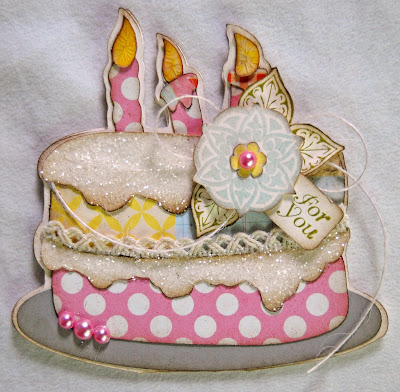 I used Crackle accents for the candles, a bit of twine under my flower, and of course lots of delicious glitter! 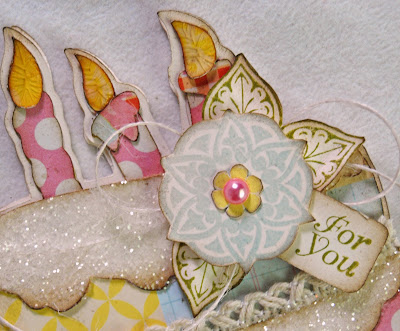 And, yes, my card does open! I placed a piece of velcro to the top to keep it shut. : ) 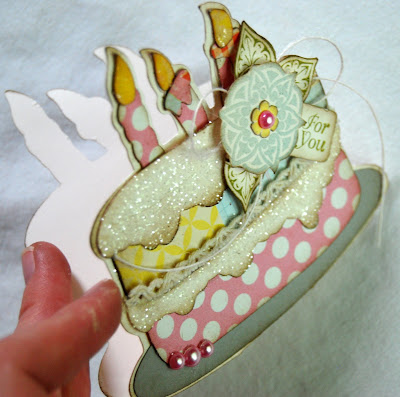 Be sure to visit the other DT gals' blogs for more inspiration using this fab new set!! : )
JustRite Inspiration

Sometimes I don't know where my brain is.......I think it gets a bit too full at times, I make really, really dumb mistakes! Like forgetting to post this card for last week's JustRite release! Oooops! So my motto is, don't sweat the small stuff, and laugh when you want to cry......and better late than never! ; ) JustRite has released this darling set illustrated by Diane Arthurs, called Warmest Wishes. Another fun set to color! 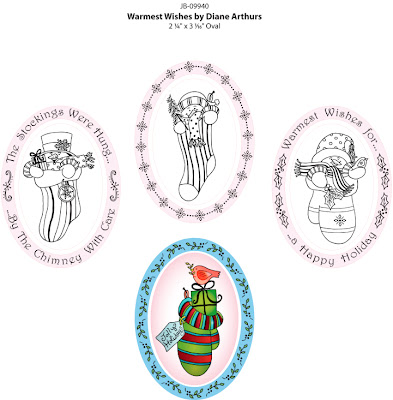 I used my Copic markers to color this sweet snowman to match my designer paper. Which I believe is by Cosmo Cricket. I love deviating from the traditional reds and greens of Christmas! I added accents of glitter using glossy accents and Martha Stewart glitter. I used 2 Spellbinder's oval dies to create a sort of shadow box for the image and popped it up on dimensional foam circles. The back layer was cut using Spellbinder's Labels 14 die. 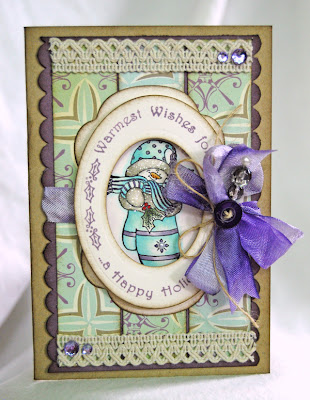 I added bits of lace and rhinestones, tied some seam binding, and added a stick pin to dressy it up a bit! 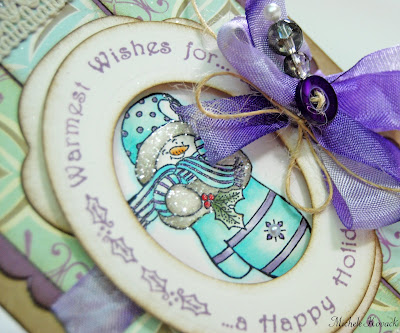 I truly enjoyed reading what everyone was doing for the 4th! It was like a nice little visit with each of you! My 4th was pretty laid back. We stayed home for most of it and swam. ( A LOT!) We grilled, played a few games with Kyle outdoors, had a bonfire, and just enjoyed each other's company. I was out of my craft room for 3 full days. It felt really good to take a break. : )
Here are a few pics from our parade on Friday night! Here is my 14 year old..........he wasn't sure if maybe he was "too cool" to attend the parade! (I twisted his arm!; ) 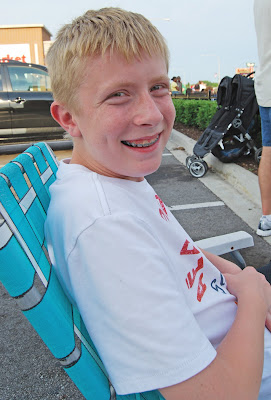 My girl enjoying the sounds and sights! 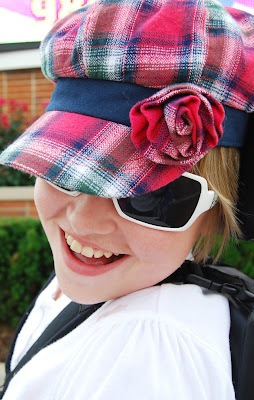 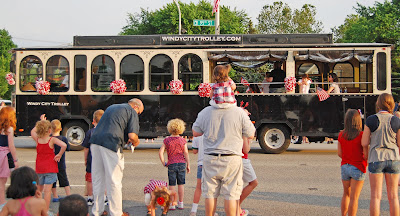 .....and an advertisement for Waterloo.......I just thought their float was fabulous! It had a bubble machine and music......the works! 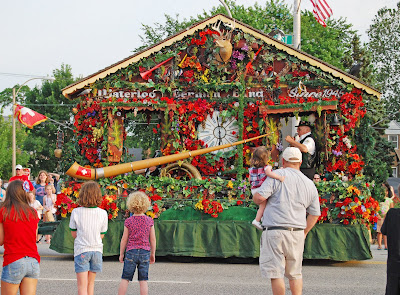 She said:
I live in a very small town, we have our parade and fireworks on Monday. The parade marches by our house and we sit int he yard to watch the fireworks. I have a TON of family that come out to spend the day - so we are gearing up for that. Great giveaway. Thanks for the opportunity.

Thank you all for participating! I really enjoyed reading what you all were doing for the 4th! : )
Posted by Michele Kovack at 9:15 PM 3 comments: