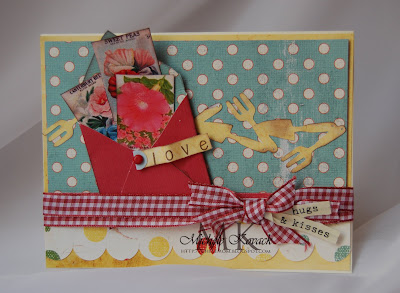 I had a little free time this weekend because my hubby is out of town on a golf trip, which incidentally has not been starting off too well! Here is the story...if you don't want to read about it just skip to the next paragraph! He and a friend of his were staying at my Dad's house in Michigan for one night and then headed to Battle Creek. He and his friend played a round of golf, came back to the house and fell asleep. He went into the kitchen for a drink and stepped right into a puddle of water! The refrigerator had died! So he had to call my Dad and my Step-mom to tell them this bit of news! He and his friend transferred all of the food into the garage fridge.....he always says it is a pressure to stay at someone else's house! So it gets better.....He and his friend leave to go to Battle Creek. They are driving on the highway when they see 2 deer. My hubby Brian told his friend to be careful cuz they always travel in groups. So they slowed down, Brian reached down for his cup of coffee and .....BAM! They hit a 3rd deer running across! He told me a little while later that it was a gruesome site! I won't go into detail but can you imagine hitting a 400 lb deer at 45 mph! Fortunately, it WAS a rental car, AND no one was hurt, AND the car is damaged but drivable! So they went to the police station and filed an accident report. He was quite shaken but OK. Of course all I could think about was, what if they had taken his little Saturn? He would have been killed for sure....I guess this makes you appreciate life a little more....Because in one day life can really change.

Now, about the card....I love these images from Tuscan Rose! Patty had the most gorgeous collage sheets! I decided to use the small flower images like packets of seeds. I cut my own envelope out of red paper. The paper is from Daisy D and Cosmo Cricket. The garden tool border is cut from my Cricut! Do you see the cute twist tie? I have had that for the last 6 or 7 years and decided to resurrect it! I love using some old stuff!
Posted by Michele Kovack at 5:57 PM

Thank goodness nobody was hurt in accident, its true you never know what a day brings, life is precious and we are only promised one day at a time.
Now for your card, its beautiful and I love the paper, 2 great faves of mine :) x

I am so glad that the golfers are alright....it makes you realize how wonderful just a normal boreing day can be after an adventure like that.
I adore your card ( :)) Please tell me how you got that bow to be tied in front so cute....You used all my favorite paper companies too!
Did you see that Lisa Z has you metntioned on her blog?

What a great card, love the paper and the packets, everything about it is great. Think maybe golf is not your husband's game.

I'm very glad to hear that your Hubby and friend is ok. Thank the Lord that it wasn't worst.
Now for the card, it is really cute, you have a lot of neat elements going on!

I have always feared running into a deer. We clipped one once, the damage they can do... Anyway, I love your card!! I have to start making cards again!! what inspiration. My birds are on ebay I only have one for sale right now, Im gearing down to go on vacation. You can find my ebay link from my blog.

Good thing nobody was hurt in the accident. That card is just adorable.

Goodness me, I'm so happy that no one was hurt in the accident.

The card is just beautiful!

Oh my... thank god they are all right. God is watching us, right?

The garden tool border is soooo cute, can't help to notice it!

Glad everyone is OK. Love the card, so many cute items.

So glad everyone is okay!

I love your color combo!

Love that card, cute colors together.
I hit a deer on 294 once and I just clipped its bootie and you can't imagine the gross that was on the car and the damage and I didn't even kill it, just bumped it and it scampered back to the woods. They were very lucky, someone was watching out for them, for sure!

I am so glad that your husband and friend are okay.

Your card is beautiful.

I'm so glad to hear that nobody was hurt in the deer accident!

Your card is gorgeous! Such a nice design!

So glad no one was hurt! We've hit a deer before - very scary and amazing at the damage it can cause!

Your card is absolutely adorable. I LOVE it! The colors are wonderful, and well - everything about it is just perfect!

What an amazing card!! This is just stunning to look at! :0)

Gorgeous card!!! You asked about the kid stick figure. It's by me&myBIGideas, also showing Creative beginnings.com on the stamp. Happened to be on Frugalities.com today and noticed the whole entire set of these figures at a very great price. SCS enabled me today :)

Sorry about your husband's trip but I'm glad no one was hurt. I love your card.

Wow, great card!! Sounds like your husband had an interesting time - glad no one was hurt . . . 'cept the deer!