Happy Father's Day to all those Dads and Father figures! I am blessed to have many wonderful men in my life! : ) 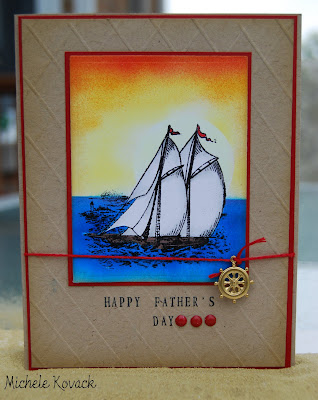 This card is really out of my norm! I had this inspiration to ink and emboss the ship and use my Copics to airbrush the water and sunset. I used a piece of paper and a circle punch. I punched the hole and used the negative space to create the setting sun. Then I took the positive circle and placed that on top of the sun and continued airbrushing around it. (Let me know if you would like to see a tutorial on this! I always feel that whatever I would put here on my blog, has been done on someone else's! ) After the sky and water were airbrushed, I cut the image with my Spellbinder's Nestibilities. I scored my Kraft card stock diagonally for some interest. I used my JustRite stamps (Times New Roman), to create the sentiment......because my son lost my Father's Day Stamp! Ahem.....not mentioning any names! 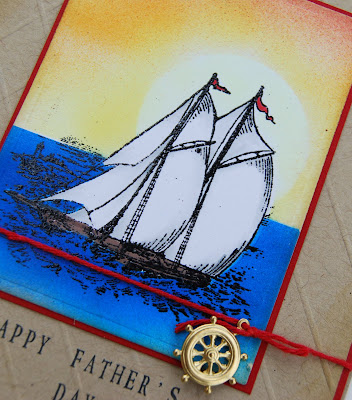 Many moons ago I bought lots of charms off the Internet......but have no idea what site.....but I do know they were inexpensive!
Just an FYI, tomorrow I will be starting my week as guest blogger over at the JustRite blog!
Have a wonderful Father's Day!!!
Posted by Michele Kovack at 6:47 AM

this is gorgeous. wow!

congrats on being guest designer at just right - way to go.

how did arlington go?

Very pretty! It looks so calm and peaceful!

Love your blog. Thanks for popping by mine.

Ohhh what a beautiful card Michele,l love the image and colours.

Gorgeous card, Michelle. The charm is just the perfect touch, too.
(It was great meeting you yesterday and chatting....hopefully we'll be at Craft Fancy together again:)
Happy Father's Day!

Look at that beautiful sunset...WOW! You did it perfect! Great card!

Absolutely stunning Michele!! I'm sure your husband was very impressed and honored with your handywork!! Looks fantastic and it was a great idea to use kraft and score it as you did ... AWESOME!!

Gorgeous card, love that background and the scoring grid!

Wow! This is beautiful!

wow! This is so gorgeous! I love how you airbrushed the sky!

You created a beautiful scene!

Michele this is fabulous!! Looks like a painting it's so pretty! :)