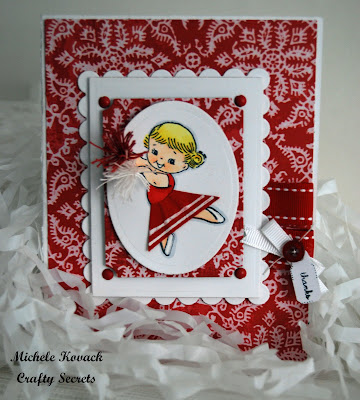 I know you are probably sick of me posting about the Jordan's cheerleading by now.......I just can't help myself!!! I promise this to be the last post about it......for awhile.

The other moms asked if I could make a thank you card for the man who organized this entire basketball/cheerleading/pizza party/game this past Saturday. He is a man from a local parish who, out of the kindness of his heart donates his time and money to our kids. So I figured it was the least I could do.

When I got home, though, I was struggling with what the heck I would stamp. I don't own any cheerleading stamps. (who does?!) But, I did have this Little Dancer set by Crafty Secrets. I had one of those "AH HA" moments! I thought, yea, I could make little tiny pom poms, and a skirt to match!!! (I know.......seek help......) So I started with some white tatting string and colored it red with my Copics. Then I folded it over itself many many times until it was full enough to look like a pom pom. I tied it at the end and took my scissors to cut the many loops I had created by folding it over. I did the same with the white, until I had itty bitty pom poms. I colored her in with Copics and had the darnedest time making a skirt for her. (I guess cuz her legs are really more in a dancing position.....) I know the skirt is a wee bit long for a cheerleader, but it was the best I could do. I used my oval Nestibility for her. I took my paper piercer and pierced holes in both her hands. I pushed the "handle" of the pom pom through the hole. I used pop dots while layering to allow for those "handles" in the back. The paper I used was by Crafty Secrets too and some white SU! The sentiment is by Papertrey Ink. (Which I love because it fit so nicely on that jewelry tag!)

Off to get ready for work. Thanks so much for taking your time out to visit me. Have a great Monday!!!!
Posted by Michele Kovack at 5:52 AM

This is adorable!! POST AWAY my friend for they are all lovely and inspiring!!

Michele I think your idea was very creative. You didn't have exactly what you needed but you made you had work. That's creativity at it's best. Your little gal definitely looks like a cheerleader! Great card and great idea!

As for the cheerleaders - keep talking - they are a breath of fresh air and you should brag as much as you can :)

Hey....keep those cheering chicks coming~I LOVE to see and hear about them! And hey, who couldn't use a little more *cheer* in their lives? ;)
You are SO clever~you totally made that work!

The card is just adorable!! Look at you go!!!

Oh...I love how you've turned her into a cheerleader, Michele!! So clever, and I love the pom poms!!

Hi Michele,
Oh she is just adorable and you have done a GREAT job of making her into a Cheerleader! You get a perfect 10 for this one!!!
Don't stop making things about your little cheerleader there; I love to see her and hear all about what is going on!

Oh Michelle I just love this card. How clever of you to convert the ballerina into a cheere leader.

This is awesome...I love the little pom-poms! And Cortney looks super in her cheerleader outfit below!

Michele, my daughter would love to be a cheerleader but we aren't big on it up here in Canada, isn't that sad! Anyway, the card is wicked!

This is so cute! Fun pom poms! The length of the skirt is just fine; it reminds of the 50's and what Olivia Newton-John wore in the movie Grease when she was dressed as a cheerleader, lol.