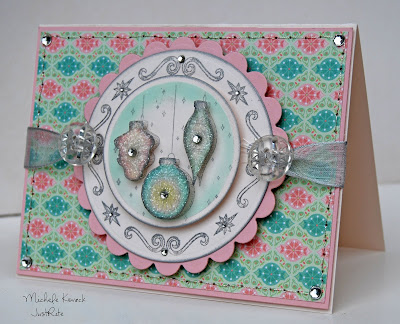 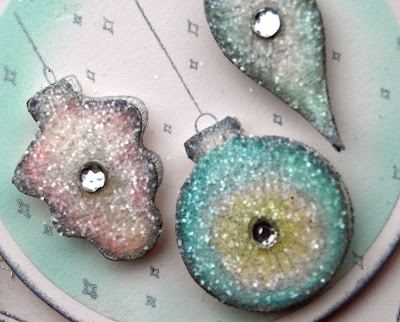 Posted by Michele Kovack at 8:00 AM

Michelle, this is as pretty and serene as it can be. Every element works perfectly together!! I love the clear vintage buttons!!

So beautiful, Michele! Love the glittery ornaments and lovely colors!

Absolutely delightful!! I've been excited about this blog hop all night! I was crafting with Kazan yesterday and couldn't wait to see what everyone else had in store for today! Such yummyness!! :D

Oh wow, Michelle, you brought back a very old memory! When I was a girl, we had ornaments that looked just like these. Glitter and all! I think I still have one of them. It's in serious need of some love. So maybe this year when I get out the decorations, I'll fix up the glitter. I have some very unusaul colors of glitter, there must be one in my collection that looks like that old ornament. TFS

Great job Michelle with the glittered ornaments. Such a wondeful idea!

What a wonderful card Michele,I love the images and your papers.

I love the colors on this card. Beautiful.

This is so pretty. I love the vintage look of the glittery ornaments.

Beautiful card Michele, I love your gorgeous ornaments and the pretty colour scheme is gorgeous, I think I need these papers. Thanks for sharing!

Love your color combo and all that sparkle!!!

Oh so pretty Michelle! Those shimmery, sparkling ornaments are so beautiful!

Very, Very pretty, love the colors and embellishments. Thanks for sharing your talents.

Very, Very pretty, love the colors and embellishments. Thanks for sharing your talents.

Love the sparkly ornaments and the colors you have used. Beautiful card.

Great colors and I really like the sparkle in the ornaments

Love the glitter!! And those colors are truly reminiscent of the old days!

One of THE most luscious Christmas cards I've ever seen, Michele! Love your glittery ways!

Wow I love this card, just awesome, the glitter and design rocks. Melxx

So Beautiful Michele - I just adore your sparkly ornaments!!!

Love the bling and glitter. Your colours and design are so retro and pretty!
Thanks for sharing! :o)

Beautiful card Michele and I love those ornaments too, I have some very similar that were on my Grandmother's tree originally. I love the colours and all the sparkle and the silver accents look wonderful with these pretty colours. LOL re getting your cards made, this is one way of doing it :D. Hugs, Chris :)

This is a beautiful card. Love the Justrite stamps & you've more than done them justice.
So sorry to hear about losing your friend. Your tribute to her is amazing & I'm sure she's looking down smiling at you ...
Hugs, Janie

Beautiful card, I am in love with those buttons too! ~Diane

Oh my you make a pretty card...loving the glitter!

Michele, you card is Beautiful!! I love the colors, glitter and rhinestones!

Michele this is gorgeous!! I love love the colors and the bling - beautiful job!!

Michele, I love your choice of colors and the ornaments almost come to life.
hugs,
Brooke

This is such a great resource that you are providing and you give it away for free. I love seeing websites that understand the value of providing a quality resource for free. It?s the old what goes around comes around routine.