Well, for those of you staying up late worrying about my poor hubby......( a wee bit of sarcasm there! : ) He is doing great! As a matter of fact, he says he feels much better now that the tooth is gone. Now he has to get a root canal on his other back molar. He is really jumping up and down over that one! (again........sarcasm..... : ) Yesterday I was off the computer the whole day....can you believe it? I tutored in the morning and then was asked to go to lunch with two of my very good friends/coworkers. The three of us headed to TJ Max for some shopping. 3 hours we were in that darn store! We had such a great time together! Kyle is at his Gram's, and hubby was out to dinner with an old boss, so that just left Cort and me. She and I had dinner, took an hour long walk around the neighborhood, and then swam until 7:30 PM. I have been diligently working on some thank you's for Cort's friends but have yet to finish them! So that is my story.........

On to my card! I used Crafty Secret's Garden Scraps for the main image. The background was done with Spellbinder's Impressibilities and Glimmer Mist. I didn't want the background competing with my image so I added a layer of cream cardstock. I pierced it, inked it, and distressed it. For my finishing touches I added a paper key, ribbon, Prima flower, and a few pretty stick pins. 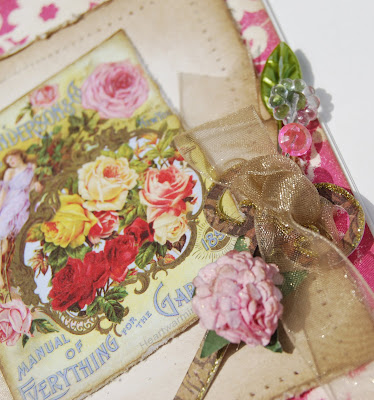 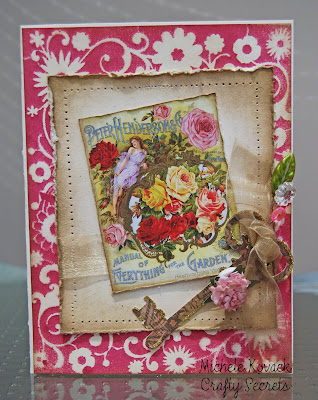 I am hoping to catch up on some of my blog reading this week.......as I feel very behind lately!
Thanks so much for stopping by!!!

Posted by Michele Kovack at 6:47 AM

Stunning card! I love all the glimmery colors and the way you set your image off from the background. Really gorgeous.

Thanks for stopping by my blog and for leaving me the nice comment.

This is very pretty! I love the key!

Oh my word, Michelle, this Garden Scraps card is breath taking. It is just about the prettiest thing I've ever seen. I just love it and am seriously coveting it. your work is always par excellence, my dear.

That is GORGEOUS! Glad your hubby is doing better : )

Hello!!
Yes, I was worried about your DH...heehee!!
Loved what you did with the Impressabilities & mist...should get mine out and do something! LOL! I'm lovin' my Crafty Secrets' scraps too...need to get more. Have a great (rest of the) week! xo

absolutely gorgeous. love the shimmer and glad hubby is better! men! they are such babies!

This is so pretty! The card has such great texture.

Lovely card! You are so creative! TFS

That card is just beautiful!!

this is simply beautiful! love all the bright colors together!

What a beautiful card!!! Happy your hubby is better! Hugs, Paulette :o)

This is beautiful! Thank you for your kind comment on my blog!

Absolutely gorgeous!! Really love what you've done here and the sparkly key with flower/ribbon is the perfect finishing touch!!